The catch of the worlds biggest carp in Thailand prompted a frenzy of press and internet forum activity around the worlds angling fraternity. There’s been a right load of carp in more than one forum, where images of the biggest carp ever to be caught on rod and line were posted, that the fish was obviously a fake.

Comments such as  “the eyes are in the same position on all pictures”, “the mouth is open on each picture”, “the guys holding the fish are not struggling with its weight”, ” The scales look like they were airbrushed”, ” It looks like fibreglass”. Yes, these are just a few of the humorous comments. But it is understandable as many people have never seen or heard about the amazing mega fish and fishing in Thailand. The fact that there are catchable and monstrous man sized freshwater fish swimming around on three continents is not widely known among the masses in the west, mainly due to previous lack of research, the locations of the fish and not enough scientifically recorded captures of what have become known as Mega freshwater fish.

The biggest carp ever caught on rod and line has been doubted by many as an authentic catch. What a load of carp. The growth of angling tourism, guided fishing and the Internet over the last 20 years has bought  awareness about some mega fish to people in the know and given the chance to a few lucky western anglers and scientists to have an up close and personal with a mega fish. In general most people who have heard about the mega fish have so through TV docs and favourite fishing shows. When we look at photos of mega monster fish that make anglers looked dwarfed or see the angling presenter trying to catch them for the cameras, we can stare in awe, new discovery and wonder but  we should all, not forget that most of these freshwater mega fish species are under threat and struggling to live in the wild and that is the message that can hopefully be understood and passed on from this latest giant carp catch.

Most so called mega fish are endangered in their natural habitats and some are critically endangered or thought by some to be extinct already. Of course this is due to human activities such as, Over fishing, Dam building, Water pollution, Deforestation and many other nice things that we humans cant help but continue to do to our planet. There is a race against the clock going on to learn more about these amazing creatures of which some are in real and present danger of extinction. Still we can hope that it is not too late already to have found an answer and we may yet find out which really is or was the largest freshwater fish on the planet. So which are the Freshwater Mega fish species? Heres a brief rundown of some of them, with a few reported facts and figures. 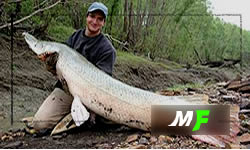 Alligator Gar (Lepisosteus spatula). The Alligator gar which is the largest of the Gar family is also the largest exclusively freshwater fish in North America. Various specimens have been recorded around 2 meters in length and weighing at least 40kg. The current rod and line world record for the Alligator gar is 126.5 Kg ( 279lbs) and was caught in the Rio Grande river in 1951. A larger fish was caught on a trot-liner also in the 1950’s which weighed 137 kilograms (302 lb). Sadly these catches are now almost 60 years ago and the chances of catching another one of these giants and finding if this is a true contender for the Mega fish title may be gone.

Arapaima/Pirarucu (Arapaima Gigas) AKA: Paiche , Wararapaima.  The Arapaima is a Mega fish. That is plain to see, with some amazing recorded catches in excess of 180kg being caught in Thailand and that is not even this species native range. Arapaima gigas has a published weight of 200 Kg (440lb) and there are lots of unconfirmed reports and stories of fish considerablly larger. The Pirarucu is a staple food fish in some parts of South America and also caught for export so its under pressure although its not known about its red list status in the wild. Much of the South American native land of the Arapaima gigas is real wilderness or impenetrable Jungle so research is lacking on this species. Mega sized Arapaima are, as far as we know pretty rare in the wild these days but they can be regularly caught up to 2 meters in Length. The Peril of the paddlefish. Could these be some of the last photos of an amazing if not strange looking Chinese fish species. 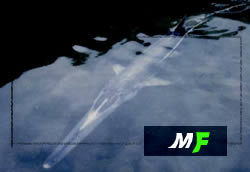 Chinese Paddle Fish (Psephurus gladius) AKA: Chinese Swordfish, Elephant fish, Panda of the Rivers,Chooop Swordfish. The Chinese Paddlefish is definitely among the contenders for the largest of the Mega Fishes. Unfortunatley this fish is extremely rare and thought to be extinct. There are reports of a fish being recorded around the 1950s which was 7 meters in length. This report is not confirmed to be authentic. A 117kg, 3.3 meter long fish was accidentally captured in 2003, this fish was estimated to be 30 years old, it later died from its injuries. Continued dam building projects on the Yangtse river which split the paddlefish population into isolated groups are thought to be the main cause for the decline in the species. In the 1960s a few small paddlefish of 2-3kg were accidentally caught and the future looked very dark for the species but the fact that the 117kg specimen was captured in 2003 may mean there could be yet surviving specimens.

Giant Freshwater Stingray (Himantura chaophraya) AKA: Freshwater whipray.This is the unofficial king of the Mega fish with a published weight of  600kg. That’s the weight of the largest ever Mekong giant catfish recorded. There are pictures of a Cambodian fisherman holding a giant stingray from 2002 of a stingray that measured 202 centimeters (79.5 inches) in diameter and 413 centimeters (162.6 inches) from the tip of its nose to the end of its tail, it was unfortunately never weighed because no scales were available that were big enough.The Freshwater whipray is native to Thailand aswell as Cambodia, Eastern Borneo, New Guinea and Northern Australia of which the later really are wildernesses so who knows what size these giant stingrays could actually grow to.

Mekong Giant Catfish (Pangasianodon gigas) The current largest recorded exclusively freshwater fish and in the Guinness book of records is the Mekong Giant catfish. That record breaking specimen weighed in at 293Kg (646lb) and  2.7m (9ft) in length. It was caught by local fishermen (with nets) in Northern Thailand in 2005.  and after having its eggs harvested was reported to have died, then sold for meat to local villagers. This species is on the critically endangered list and teetering on the brink of extinction, again due to its habitat and spawning routes being blocked by river damming. Unfortunatley the problem is complex as the dams are high up the Mekong river in China where the fish are thought to go to spawn but the effects are registered in Thailand and Laos where the fish used to be caught (for food) annually in significant numbers. They are now almost non existent. This pattern of decreasing catches means the population has fallen by more than 80 percent in the last decade.

Giant Siamese Carp (Catlocarpio siamensis) AKA: Giant Barb, Great Barb, Caho. If we were talking English Premiership football then the Siamese Giant carp would be up there with Liverpool FC as a top contender. It is the largest fish in the Cyprinidae family with regular sized specimens being 1.5m (5ft) in length and weighing 45Kg (100lb). The largest recorded in the past tipped the scales at 300Kg (600lb) and 2m (6ft) in length. which would be bigger than the largest Mekong catfish but recorded specimens of this size in the wild are now thought to be confined to the history books.The only other Carp species to even come close would be the Indian Mahseer but nothing of monstrous proportions has been witnessed in the last century. 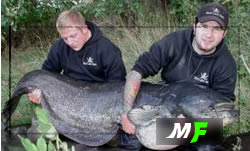 Wels Catfish (Silurus glanis). With a possible total length up to 3m and a maximum weight of over 150 kg (330 lbs) the Wels catfish is probably a middle weight in the Mega fish division, these sort of  lengths and weights are  rare and have not been scientifically proved during the last century.Only with a very favourable environment can the wels catfish grow to more than 2 m. There have been various recorded catches over the last couple of years of specimens around the 200lb mark, with the most notable being a 226lb (102kg), 8ft (2.4m)monster which was caught in the River Ebro in Spain by Carl Smith. The Wels cats is the Ebro have had a very good constant diet of food since thier introduction to the river some decades ago.With catfish fishing becoming increasingly popular and anglers travelling to eastern Europe in search of giants we might still witness a 300lb fish in the future but even this size would not even compare to the Wels catfish’s asian cousins.
Please note that we did not yet include the Sturgeon in this group because it is known to live in both fresh and salt water environments.

Photos courtesy of Nathan Wardle, Dr Steve Mims.Phd, Jean-Francois Helias, Captain Kirk Kirkland.
CONTACT US NOW for pricing and booking information. We look forward to seeing you fishing in Thailand with us soon whether you are a match angler, species hunter or big fish specialist Join us at one of the many unique and amazing fishing parks, lakes, rivers, reservoirs and dams that are here in Thailand. There really is an unforgetable fishing in Thailand experience for all anglers at all levels from all backgrounds.