How to prepare for your very first fly fishing trip: Fly fishing tackle Primer. I think it must be common for first time fly fishers to be shy and not want to ask the necessary questions about equipment. I am like that all the time. This article is about basic fly fishing equipment and assumes you don‘t know anything.

Bamboo rods were the best rods before 1947 when the first Shakespeare fiberglass rod was invented. There are fishers who have continued on with these rods and a revival has occurred now and they are much sought after They are found in 4, 5 or 6 sided styles.
Fiberglass rods were excellent until graphite took over in performance and lightness. I would recommend that you use whatever rod you already have at the beginning. If you need to buy one then I can give you my thoughts. Let’s assume that you want to fish a stream for trout while wading like you may have seen in a calendar picture. I think that is my favorite way to fish. Get a graphite 5 weight rod with 4 pieces and cheap. That means it will have a slower action so you don’t have to make a decision about what action you want. This is a basic entry model for trout fishing. If you later decide to upgrade, this will be your old rod to keep in the trunk for emergencies or back pack with or loan out.

The all around trout rod is close to 9 feet long, plus or minus. It will be easier to cast longer distances and reach over boulders when stalking and control your line. A short rod is easier to carry through dense brush. For a brushy small creek, a short rod is probably nice to have.
There is endless debate on line weights. I think a 5 weight would be best. That gives your line enough weight to cast pretty easy with some wind and without the rod being so stiff that you begin to lose feeling when fighting smaller trout. I don’t even own a 5 weight. I read something 30 years ago that said you should plan early to have 2, 4, 6, 8, 10 and 12 weight rods in you arsenal or to have a 3, 5, 7, 9, 11, and 13 weight rods so you won‘t need to buy twice as many. I started with an 8 and now a 4 and a 6 weight so it‘s too late for me. The idea is that you will want to fly fish for more types of fish and the 12 to 15 weights work better on 1000 pound marlin because they are a trifle stronger (like having a gun collection from derringers to cannons).
Don’t worry about the rod’s performance since you don‘t even know how to cast yet. I bet the cheapest fly rods you see today are superior to the best of bamboo years ago and those fishers seem to have done great with their rods.
When you buy your second rod you will be coming from a place of power after having some great seasons fly fishing with your econo-rod. You have probably tried a number of rods by that time and talked to your friends and watched for deals at fly shows or at a dealer. You will probably have some affection for old Betsy and it would be great to hand her over to some future fly fisher you will some day introduce to fly fishing (like should have happened to us so we wouldn‘t need to read stuff like this).
My current fly club president showed up at last year’s fishing camp with a fiberglass rod with honest-to-goodness duct tape around a loose guide. He went out and scored well on the trout. Hurry up and get a rod so you can go fishing with us, and try not to slam it in the car trunk before you fool your first trout. 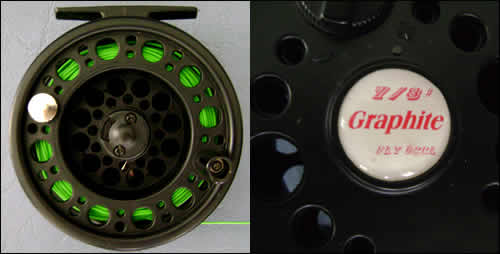 I would recommend getting a cheap reel. One drop onto a rock and the reel can loose a great deal of value so get a cheap one at first. I try to buy graphite reels because they don’t dent or bend when dropped and they are corrosion resistant compared to metal reels. They are not popular and consequently not many graphite reels are manufactured. Buy a reel with extra spools available in case you want to use other type lines in the future. You don’t have to buy any extra spools yet, but probably some day. Don’t get a multiplier  or automatic reel  because they can call attention to you and you don’t want a lot of staring at you on your first fishing trip. It would be like a first time bowler wearing an orange tuxedo. Being a contrarian at times, I am actually going to rig up one of my used automatics (I get them as presents like you get fruitcakes) and take it fishing this year. I also will eventually have to get a multiplier. I bet a lot of 1:1 purists will want to try my 1:3 gear ratio.

There are favorite recipes from many fly fishers concerning the making of a leader. You can even buy tapered ones if you want. The first time you go fishing you might make your leader like this. The length of the leader with fly attached should be about the length of your fly pole. This way you can keep the leader to line knot out of the guides so you can feed out the line easily when starting to cast and a knot in the guides hinders landing a fish. It still is generally long enough to not scare fish with the fly line. Then divide the length of your pole by thirds and make 3 pieces of monofilament that long. If it is a 9 foot rod then each piece is a little longer than 3 feet since some length is lost with the knot tying.
The butt section tied to the fly line could be 3 feet of 15 -20 pound test monoflilament. The middle section could be 8 – 12 pound test mono. I have been using medium priced fishing line for these two sections.
The last piece or tippet can be a 3 foot piece of 3 – 6 pound test mono. I get fancy here and buy some real tippet material from a fly shop and try to get one that doesn’t get real curly too fast in use. Some fishers use flourocarbon even on dry flies so it sinks in close to the fly to be harder to see and some use nylon so it floats easier so don’t worry about your choice too much until you’ve made up your own mind.
This should give you a good working leader. Make sure you can tie the knots efficiently before you go fishing so replacement of pieces of the leader aren’t that big of a deal.

Get a weight forward floating line. I assume you bought the 5 weight fly rod so get a 5 weight line. Have the line weight match the rod weight. Later you will discover that there is an exception and that shooting heads (short lines for long casts) are often one more in weight than the rod.

You probably will use dry flies or indicators with nymphs so a floating line will do all this the best. The weight forward line is heavier closer to the tip so it is easier to cast. The double taper is weighted exactly in the middle so when one end wears out you can tie it on backwards and use it again and save money. It isn’t that easy to wear out your line so I think you should get the one that casts better and you’ll be happier with a couple of years of good casting until maybe it wears out.