Taken for a Six Hour ride by a 100KG (220lb) Freshwater Stingray.”Each time the ray decided to stick on the bottom, there was no way we could move it, not even for a single inch. When it was crawling slowly on the river’s muddy bottom, we would pump it like if it was a matter of life and death but without being able to lift the ray vertically a single inch.” 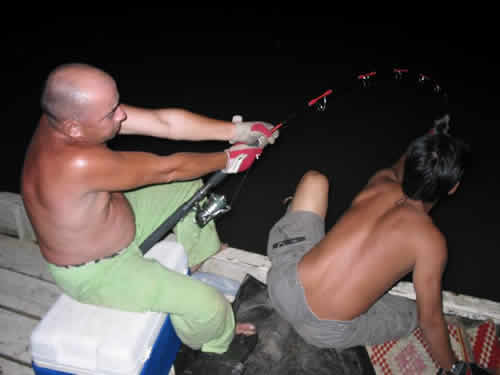 Jean francois Helias, Battling the 100kg Freshwater Ray. The team took turns to fight the giant ray all exchanging shifts through the whole six hours it would take to land the beast.

My Freind from Belgium Mr Philippe Pletincx, a many time returning client, had already landed a 30 kg Freshwater Stingray (Himantura chaophraya) that hot afternoon of May. So when a second ray that had taken my bait started to run full speed to the middle of the river, to make it fair to my second guest, Dave Garber, an American angler from Minneapolis, I gave him my personal 30-60 Graphite USA Custom built rod. So he could enjoy himself experiencing a fight with this unique ray species.

Dave had been fishing with us for 9 consecutive days around the country. It was his very last fishing session with us as he had to leave Thailand early morning at 4.00 am the next day. This second ray bite occuring at 6.30 pm, I thought then he would have easily enough time ahead of him to land the fish. We had initially agreed together to have a van pick him up at the river late at night, at 1.00 am, to take him back to his hotel in Bangkok. But Dave had changed his mind early afternoon, asking me to leave earlier around 8.00 pm. It was his last night in Bangkok, and he wanted to have some nice Thai cuisine dinner, followed by a good nights rest. 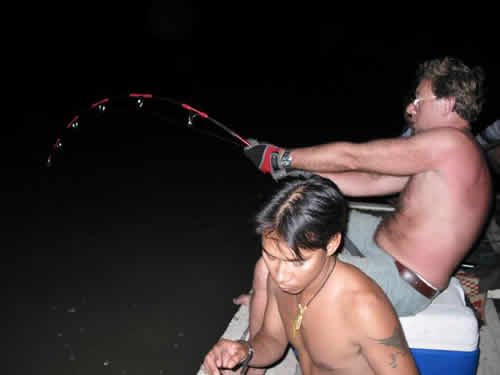 The battle with the 100KG freshwater ray, is still going strong after four hours of hard pumping action.

After Dave had pumped the stingray for one and a half hours, we already knew  we were going to be into a marathon fight that could last several hours. There was no doubt in our minds that it had to be a big size Himantura chaophraya. Thai Freshwater stingrays are said to reach weights of 450 Kg (1000lbs-max. published weight). But according to locals, today the biggest rays inhabiting the Bank Pakong River are around 250kg (550lbs). We did not have a  clue how big  the one we had hooked up could be, neither were we certain that we would be able to land it. We already knew what to expect from local friends of ours who fought huge size freshwater rays. Using low quality fishing gear, they had to fight them for 14 /16 hours….without being able to land them.

Dave was gone now. We had to take over the rod and go on with the fight. Philippe, Kik and Noi (two of my team guides), and yours truly, were to take turns at the rod, each of us giving his share of sheer strength and energy, pumping the “barn door size” ray, until it would eventually be tamed. We did not think for a second at this stage that the fight and our pumping session would be lasting for six long hours….. We had a slight handicap though. We did not have the best appropriate combo for this kind of unexpected size stingray. My personal 30-60 Graphite USA custom built rod was a largely good enough weapon “to go to war” with the ray. But the 8000 Twin Power Shimano reel loaded with 80 lb PowerPro braided line was kind of “light tackle” for the size of our opponent.

Each time the ray decided to stick on the bottom, there was no way we could move it, not even for a single inch. When it was crawling slowly on the river’s muddy bottom, we would pump it like if it was a matter of life and death but without being able to lift the ray vertically a single inch. When it decided it was time for a move, time to exercise a bit, starting swimming for good, the ray had no problem at all then to tract our 2 wooden boats tied together with ropes, with a total of 7 people on board. I felt we were a feather floating on the river…

Four hours had already passed since the ray had taken the bait. The giant ray was still doing whatever it felt like doing ,though each of us, taking turns at the rod to play the fish, was giving the best he could to make the ray get tired. We were kind of powerless in a situation where we could have asked ourselves if we were the ones fighting this fish or if it was the other way around. We had plenty of time then to let our respective minds wonder if the giant ray would ever give up. But a part from our worry about the 80 lb line badly suffering from its friction on a very bent rod’s guides, we did not have to worry too much about anything else. The atmosphere on board was nice.

The team with the 100kg freshwater stingray,which took 6 hours to land after an all-night battle.

A part from the good fun I wanted everyone to share with me during this unique angling experience, I had more seriously sent several verbal message to everyone: in the boat “There was NO WAY we were going to miss the opportunity to land such a rare and huge size specimen of Himantura chaophraya”. There was NO WAY I was going to give up the fight myself. Whatever the weight of the ray, whatever the amount of hours needed to tame it, we would all be fighting “her” until it “she” gives up. If our “karma” (you would say fate) was to lose this battle due to the line breaking on us (which was my main worry as the braid, after several hours of heavy pressure, was already showing some bad signs), then it would be fine with me. No disappointment at all, no frustration. Losing fights and failing landing fishes is also part of our passion. But as long as the line would stand the punishment it was taking, then I wanted each of us to give the best of his strength and will to battle that ray.

I had booked our 2 boats until 7.00 am the next day. And our next clients we had to guide were booked for the next day. So we had still another 36 hours ahead of us to end this fight as the winners. I told both boat captains that if we could not land the ray before 7.00 am, we would go on. I would pay them the additional day for keeping their boats. I also told my two faithful crew’s team mates, Kik and Noi, they would get their due fees too for working extra time. In the intensity of the action, money had was no issue. The only issue to me was to be able, at last, to touch and caress that ray’s skin from my own fingers. We had coffee, we had cold drinks, we had plenty of food, and cigarettes. We were a nice bunch of good friends, all cool guys with a positive attitude, crazy dedicated anglers, all having a helluva time sharing this unexpected angling adventure, and working together as a team to tame this heavyweight monster. Life could not get any better than this!

The giant stingray finally gave up at half past midnight. Later, it got released safely and unharmed, after a short photo session by the river’s bank. Through the past 18 years I have spent targeting Thai freshwater fish species, I have fought and landed numerous big fish. Either Mekong Giant Catfish – a still too unknown fish from worlwide’s anglers which pound for pound got to be rated in the top 3 world’s freshwater hardest fighting fish – either the rare and elusive Siamese Giant Carp, the “mother of all carp” – a powerful “submarine with fins” who can whoop the ass of any physically well built angler. But let me tell you these two hardfighting Thai fish species don’t belong to the same warrior league as the Giant Freshwater Stingray plays in!

Some very very tired but very very very happy anglers, with the catch of a lifetime, 100kg of freshwater stingray

Again remembering today the encounter we had with this record size Himantura chaophraya, I find myself in total admiration about the unbelievable strength such a ray species can display. It is absolutely out of this world. When it comes to freshwater sportfishing, and when it comes to fight what us sport anglers call “big ones”, the Himantura chaophraya is without a doubt “the real thing”!

That’s what we could call being taken for a ride…