The Giant snakehead  Channa micropeltes is fairly widespread across Asia and is generally thought to reach weights of up to  30kg (66lb). It has been recorded at 15kg + (33lb) from a Zoo in Kuala Lumpur Malaysia where it is known as the Toman. Here we have a photo article comparing two huge Channa micropeltes catches one from local anglers in Thailand ( Thai name is Plah Chado (ชะโด) ) and the other from last seasons Mega Fishing Malaysia trip. Which is larger? 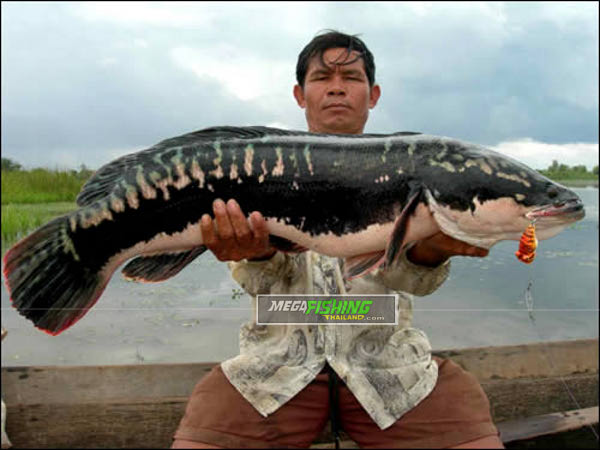 A true catch of a lifetime and a huge specimen Giant Snakehead (Channa micropeltes) caught in Thailand.  This one is being displayed with outstretched arms which makes it look even meaner. Fully grown spawning adult note the bulging head and massive paddle tail. The strength of fight and sheer power generated from a fish this size is incredible.

A different angle photo showing the same fish as above, its a real monster.

The monster specimen Plah Chado (ชะโด) is weighted on the only scales available were local market style. A real Zoo creature. The look on the local boatman’s face says it all that this is one of the biggest Toman to be caught in Malaysia in recent history The same fish is being held close in to the body and still it looks huge, at least a meter long with a huge girth and pitbull sized head. Its an absolutely huge specimen sized Toman (Channa micropeltes) This was a real freak specimen Toman and everything about it was just giant sized. Again held next to the body and not at arms length its obvious this is an extra special catch. Same fish photographed from other boat shows the full length of the fish and how its being displayed. No digital scales available so 30lb Boga grip was used. Again the fat girth of this monster is evident. 30lb Boga Grip was Maxed out with this Toman beast.