Written by Markus Buehler.
Photos courtesy of: Marcos Amend, Leandro Castello,Luis Claudio Marigo, Josae Marcio Ayres, Nathan Wardle.
The Arapaima (Arapaima gigas) is a big fish. Indeed a very big fish, especially for a freshwater species. But is the Arapaima, or Pirarucu as it is called in South America really the largest freshwater predator fish in the world, and how big can it actually grow? In popular and even scientific literature, as well as on the web, you can often read that this species can reach a length of 4.5m (14.7 feet) and a  weight of 200kg (440lb).
But is this really true? If you look for pictures of the Arapaima, you will find a whole lot of photos which show very big fish, some of them well over 2m, but you will never find a picture of one which comes even close to the alleged length.

Furthermore, this data alone is highly dubious, because the relation of weight and length is absolutely unrealistic. It is really strange why none of the authors and zoologists who wrote  about the Arapaima became critical of this before.
As there are actual recorded specimens with known weights and lengths, it is easy to compare it with the  figure of a 4.5m (14.7 feet) Arapaima which would weigh 200kg (440lb).
One example for comparison would be the record Arapaima which was caught a few years ago in a  fishing pond in Thailand. It was 2.6m (8.5 feet) in length and had an enormous weight of 185kg (407lb).
This is actual recorded fact, and shows very well that the Arapaima is a very  stocky fish. So if a 2.6m long arapaima weighs already 185kg, is it really realistic that one of 4.5m which is nearly two times the length, would weigh only some kilograms more?
No, it is far away from reality, because weight increases with the cube and such a fish would have the proportions of an eel and would  be only skin and bone. A hypothetical Arapaima of 4.5m (14.7 feet) would weigh at least 970kg (2138lb) or more, as many fish show a tendency to become stockier with  increasing size.This is really strange, because there are never any mentions of a weight more than 200kg. 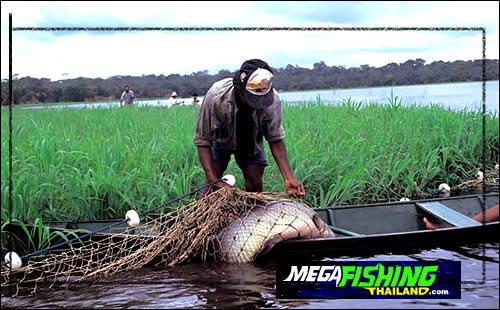 The question is now: How big  Arapaimas really grow?
A zoologist named Karl Heinz Lüling, who researched this question, found out, that actually the largest ever recorded arapaima from South-America was “only”  2.32m (7.5 feet) in length and weighed 133kg (293lb). The length-weight-relations are nearly identical to those of the 2.63m (8.5 feet specimen from Thailand..
The Arapaima has a very wide range, and  even keeping in mind that this species is in many regions over fished, so that old and big specimens are becoming scarce there, it would be really strange if  there was never an authenticated fish which was actually close to the biological maximum size this species can reach.
During the last decades, several million Arapaimas have been caught, even in very isolated regions, where there has never been commercial fishery’s. This  fish is very fast-growing and can reach large sizes in a comparably short time, and it also seems that it does not live unusually long, so there should always be at least some individuals that managed to reach their full size during their lives.
So from where are the wide-spread dates of 4.5m (14.7 feet) long Arapaimas? 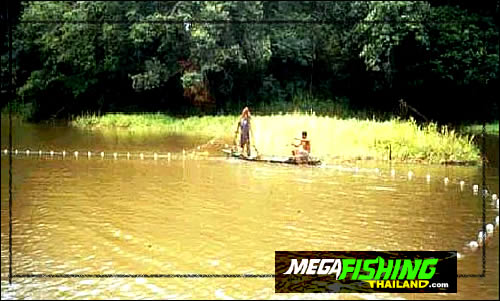 They came from a German naturalist named Schomburgk (not to confuse with the famous german  zoologist Hans Schomburgk which lived from 1880-1967) who wrote in 1936 about his voyage to Guyana that the Arapaima is said to reach a length of 4.5m (14.7 feet) and a  weight of 200kg (440lb). He never actually saw for himself such a fish, and there was also never a recorded specimen of this length.
Schomburgk was only told by members of native tribes that the Arapaima could grow that big. Since then thousands of authors have used this data without any critical analysis or research.
That means that there was never an actual recorded 4.5m (14.7 feet) long arapaima, and this data is nothing more than hearsay. It is even possible that  this was nothing more than a translation-error between Schomburgk and the native-tribes, who spoke very probably not the same language as Schomburgk.
Given the fact  that there is actually a recorded arapaima from Thailand which weighed 185kg, it is possible that the largest ever living Arapaima’s in South-America  actually reached a weight of roughly 200kg (440lb), but even at this weight, they would be only somewhere between 2,70m (8.8 feet) and 2.80m (9.1 feet) long.
It is interesting that there are  some Arapaimas from Thailand which are much larger than the actual record specimens from South-America. But those fish all come from fishing-ponds, where  they could grow with plenty of food and without any species-specific parasites or diseases which would stunt their growth in their original habitat. 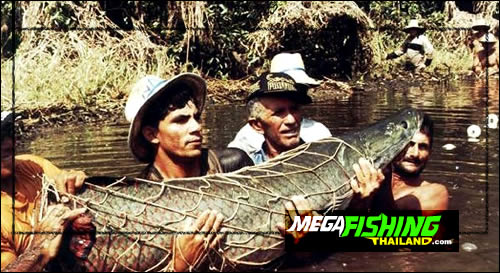 Many fish can reach comparably easy record-sizes in man-made ponds without strong competition or predators, and especially with food permanently available.
In summary you can see that the stories of 4.5m (14.7 feet) Arapaima are nothing more than fishy-tales, but this should not make you forget that this is still a really immense fish-species. But it is neither the longest nor the heaviest freshwater fish in the world.
The European catfish or Wels (Silurus glanis) has a similar  background of highly tell-taled exaggerated sizes, but the actual authenticated record specimen had a length of 2.78m (9.1 feet) at least longer than the largest  known Arapaima although being 144kg (317lb) was not as heavy.
The largest recorded Mekong giant catfish (Pangasianodon gigas) was at a length of 2,7m (8.8 feet) nearly of the same  length as the largest recorded Arapaima gigas, but with 293kg (645lb) much heavier.
There are also some other freshwater species which can surpass the Arapaima in length  and/or weight, so the Arapaima is no more actually entitled “largest freshwater fish of the world”.