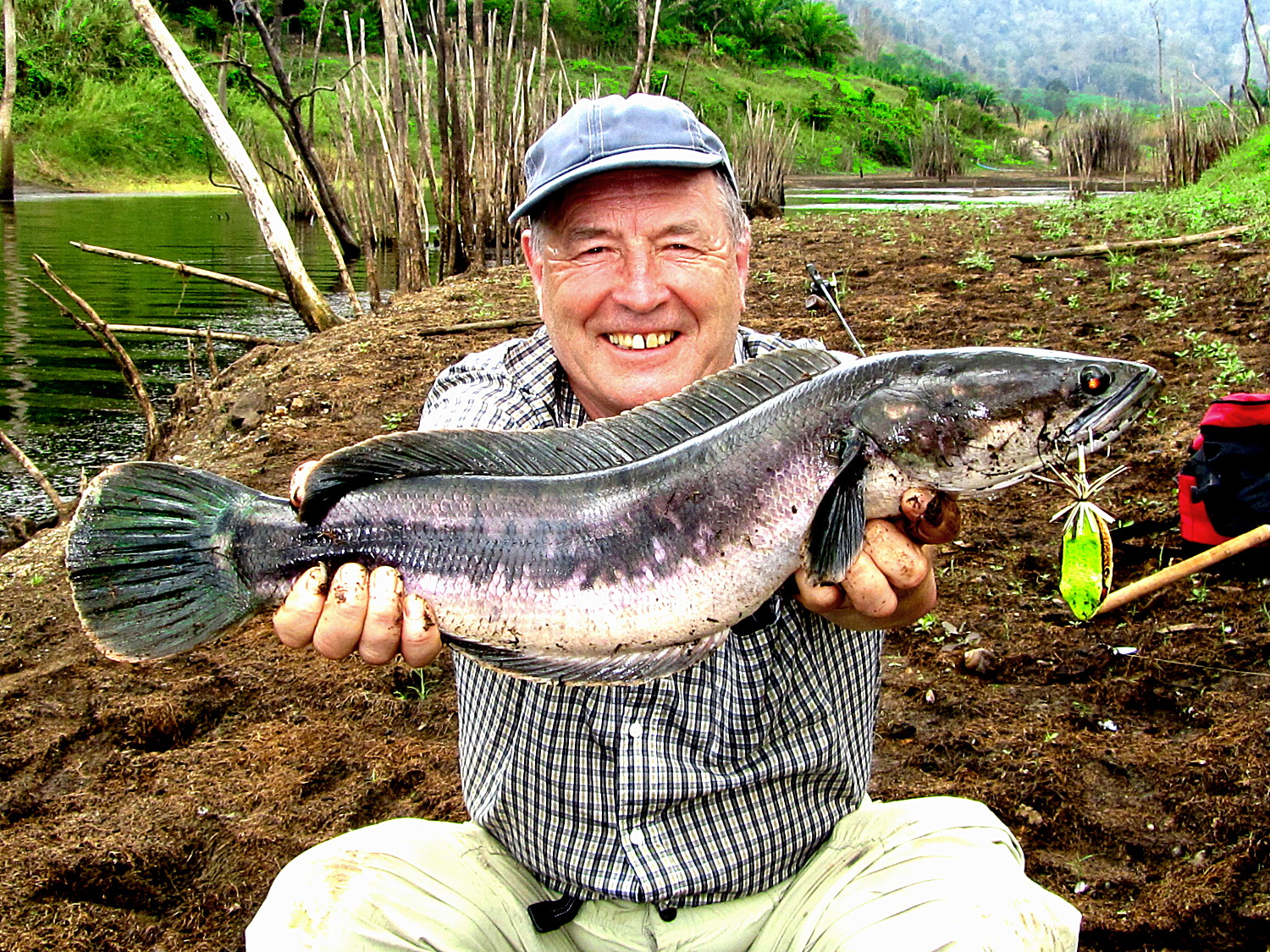 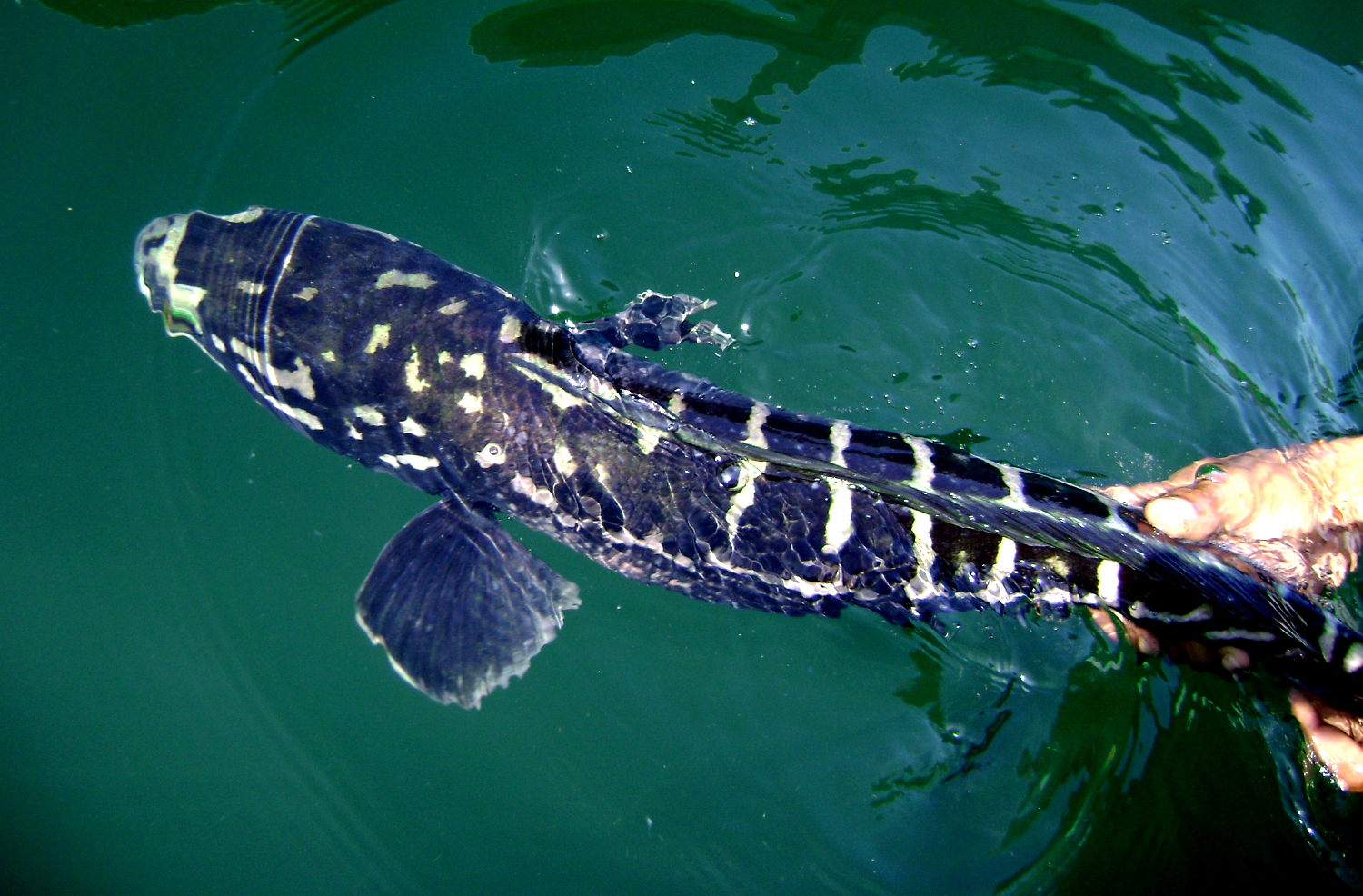 Snakeheads are predatory fish and can be recognized by their long dorsal fin, snake like head which has large scales on the top. They have a large mouth with sharp teeth for attacking and grabbing prey items. A snakeheads attack is usually vicious and aggressive. The first hit on its prey is basically a disabling move and the victim is usually left wounded and stunned, dead or dying floating in the water helpless sometimes severed into several pieces as the snakehead wheels around to clean up and finish its meal.

Channa are considered a valuable food fish in Thailand due to their fairly boneless meat. Larger species such as  striped snakehead (Plah chon) also known as common snakehead, chevron snakehead or snakehead murrell are farmed in aquaculture. The meat from this prized fish is thought to have medicinal properties for healing and is recommended to be eaten after operations.

When very young the snakeheads diet will consist of plankton, and later aquatic insects and mollusks. Adults mostly feed on other fish such as carp, also frogs and sometimes birds, mammals like mice or lizards are taken. Its easy to see where Giant Snakehead (Channa micropeltes) got its other common name in USA of Redline snakehead. These fry are almost a month old. They start out a full blood red colour all over then develop these stark orange, white and black lines. Juvenile colours are paler as the stripes fade and change before maturing into adults of  varying patterns ranging from stunning Black/White/Purple/Blue camo to the darkest black slug looking shades with pure white bellies. Markings and colouration depends greatly on the surroundings, water turbidity and ph levels. 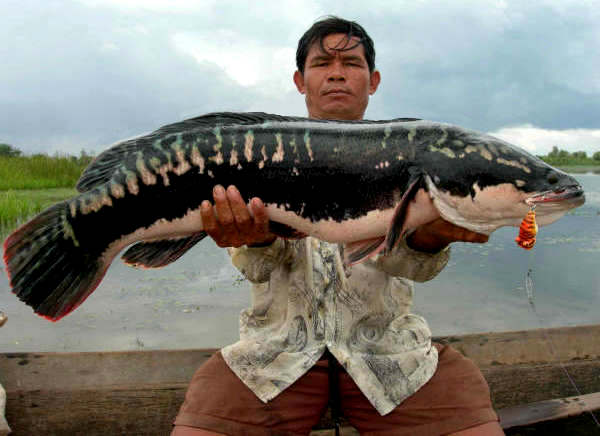 Giant snakehead of 12kg is a catch of a lifetime, thius one was caught using topwater frog lure

Snakehead fishing in Thailand is very exciting and will get your adrenaline pumping quickly, Surface lures are the most exciting tactic and weedless baits work best due to the snakeheads love of snagged up areas where they can ambush prey that is unfortunate enough to swim past. Rapala lures and similar also work well but its advised to upgrade hooks and split rings from the standard factory quality. Snakehead fishing is hard work and it is imperative to be able to cast accurately and at sometimes long distances from a boat. The fish generally inhabit areas close to the margins of waters and around submerged items which provides cover for them to hunt from. Snakehead are also fairly spooky fish so the first cast into an area holding fish needs to be on target.

Cobra snakehead (Channa marulius) or Great snakehead is an elusive fish that inhabits waters from Thailand and Cambodia through Burma all the way to India and China. Its known as Cobra snakehead because of its resemblance to the Cobra. Its name in Thai Plah Chon gnu hao translated literally means cobra snakehead...more>>

Emperor snakehead (Channa marulioides) is limited in it's Thailand range to the southern regions and is considered a rare catch due to its remote locations. In Malaysia it is know as Toman bunga which roughly translated means flower snakehead...more>>

Giant snakehead (Channa micropeltes) is well renown across the world as a sport fish. It is the top predator in its natural habitat and it is a perfectly developed hunter who will defend its young against pretty much all comers. Read on if you want to know more about this beautiful fish...more>>

Striped snakehead (Channa striata) can grow to almost 1m (3ft) in length and up to 6kg (13lb) in weight although it is very uncommon to catch such a fine specimen in the wild. This is mainly due to the fact that it is so prized for its tasty almost boneless meat...more>>
CONTACT US NOW for pricing and booking information. We look forward to seeing you fishing in Thailand with us soon whether you are a match angler, species hunter or big fish specialist Join us at one of the many unique and amazing fishing parks, lakes, rivers, reservoirs and dams that are here in Thailand. There really is an unforgetable fishing in Thailand experience for all anglers at all levels from all backgrounds.