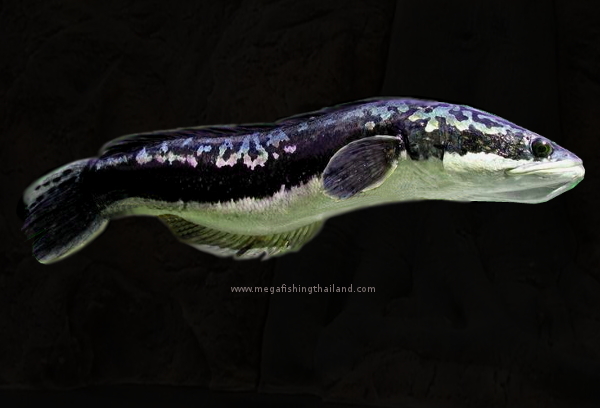 Giant snakehead (Channa micropeltes). The upper part of the body ranges in colour and markings with the main dark colour being Black/Grey to dark Grey/Silver Black. The dark colouration intermingles with striped and spotted patterns of a Light Blue/ Green to Silver Grey/ purple. These patterns create a great camouflage for when it is lying in ambush waiting for prey. 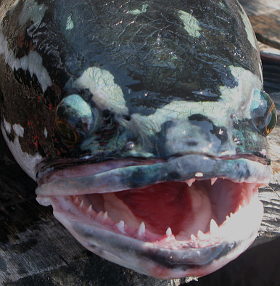 Giant Snakehead (Channa micropeltes) teeth are razor sharp, combined with powerful jaws these spectacular ambush predators often bite their prey in half and immediately disable them.

The Giant Snakehead is a perfectly evolved predator and one of the worlds most splendid freshwater fish. The top of the food chain in its natural habitat. For any unsuspecting prey it's a merciless vicious and explosive ambush hunter. If your the unlucky fish or frog that swims past its the last thing you will see before being bitten in half, kind of like a freshwater version of a Killer Whale v's Baby Seal. There's plenty of hyped up unproven facts about the Giant Snakehead especially about snakehead attacks on humans. Cases are minor and rare and only ever from the snakehead defending its fry against harm. There are certainly no proven cases of fatal attacks on humans, like most wildlife snakeheads do not waste energy going around looking for humans to bite, they will be too busy mating, raising their young, feeding on tasty frogs and fishes and defending their territory from other snakeheads. 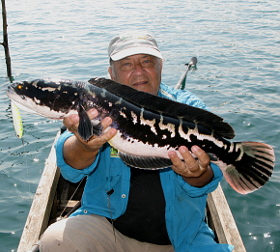 The Giant Snakehead has a rather long rounded body and a large "snake like" depressed head. There is a long dark longitudinal stripe that runs down the length of the body.The upper part of the body ranges in colour and markings with the main dark colour being Black/Grey to dark Grey/Silver Black. The dark colouration intermingles with striped and spotted patterns of a Light Blue/ Green to Silver Grey/ purple. These patterns create a great camouflage for when it is lying in ambush waiting for prey. The belly is white. It has large pointed shark like teeth which are as sharp as knives with two cutting edges which causes shearing of its prey. Giant Snakehead are usually daylight feeders being most active early morning and evening. Snakeheads body pattern and colours vary greatly from depending on their surrounding habitat aswell as the ph level of the water.

They prefer to live in weeded areas that are surrounded by snags and cover so they can ambush prey items with devastating speed. The first hit is a disabling move which usually leaves the unsuspecting victim missing a large chunk from its body or even floating around in two halves. When quietly fishing on topwater for Giant Snakehead in the beautiful scenery of Thailand the snakehead's strike can be very sudden and spectacular with a sometimes loud clapping noise and explosion in the water as the powerful jaws snap together. They are wiley predators and are very un-predictable.

Snakehead fishing is hard work with constant casting all day tight into and around submerged snags and overhanging branches. Precision of first cast is very important, snakeheads are easily spooked and a miss placed lure into a tree or stuck in grasses can easily wreck a perfect snakehead holding spot.  2 or 3 good fish landed should be considered a fine day. 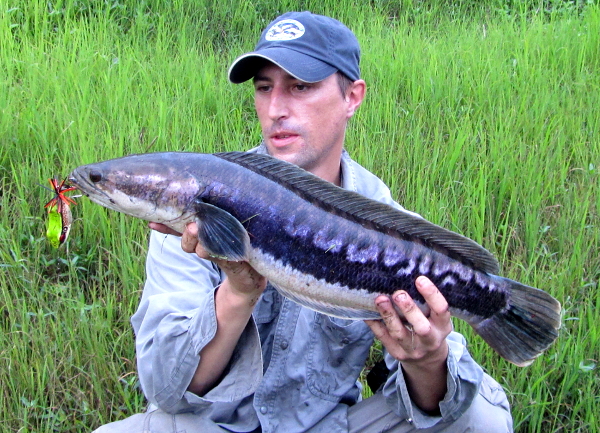 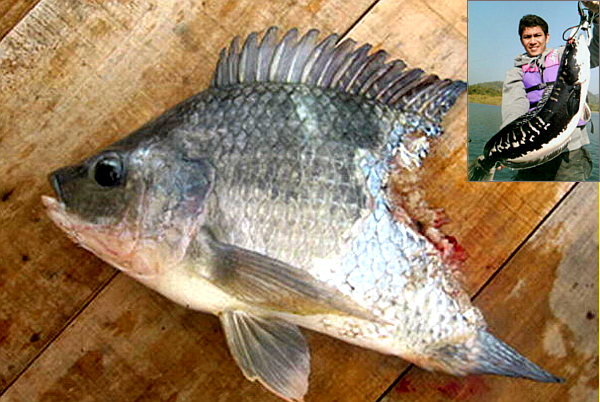 This is what one bite from a Giant Snakehead does to a half pound Nile Tilapia. Snakeheads (Channidae) are a very successful predatory species which have been around for at least 50 million years.

In their natural environment they are the top predators and as adults would have no threat other than man. They are native to Africa and across Asia and have been introduced to the America's. The Cobra snakehead (Channa marulius) has become very adapted to canals in Florida where it really flourishes in its new home with a climate that fits its natural needs, plenty of food and miles of canals, drainage ditches and eventually the Everglades to spread into.

« Cobra Snakehead (Channa marulius)
Giant Freshwater Stingray (Himantura chaophraya) »
CONTACT US NOW for pricing and booking information. We look forward to seeing you fishing in Thailand with us soon whether you are a match angler, species hunter or big fish specialist Join us at one of the many unique and amazing fishing parks, lakes, rivers, reservoirs and dams that are here in Thailand. There really is an unforgetable fishing in Thailand experience for all anglers at all levels from all backgrounds.